The president of the Public Affairs Community of Europe (PACE), Maria Rosa Rotondo, along with Matti Van Hecke, Head of Secretariat of EPACA and Board Member of PACE  – The European Public Affairs Consultancies’​ Association and new Board Member of PACE, appeared before the Constitutional Committee of the British Parliament on Tuesday 6th of December to discuss lobbying rules in Europe, after the Committee of the British Parliament launched the inquiry in July to examine how effectively the British Act is regulating lobbying activity in UK.

In the meeting, various MPs asked Maria Rosa Rotondo and Matti Van Hecke questions regarding the current EU lobby regulations to gain a better understanding of what works well or not, why, and for their input. They came to the conclusion that the EUs voluntary transparency register works well because it creates a positive incentive for not only the interest representatives, but also for the businesses, organizations and other groups that they represent. Being on the register is a condition to be allowed to meet with MPs, although the settings in which this applies are not yet clearly defined, but should be. To be on the register they must fill certain requirements, breaches of which can lead to their removal which causes reputational damage as well as makes it more difficult in general to represent their interests in Brussels. In the words of Matti Van Hecke, “life is easier when on the register.” 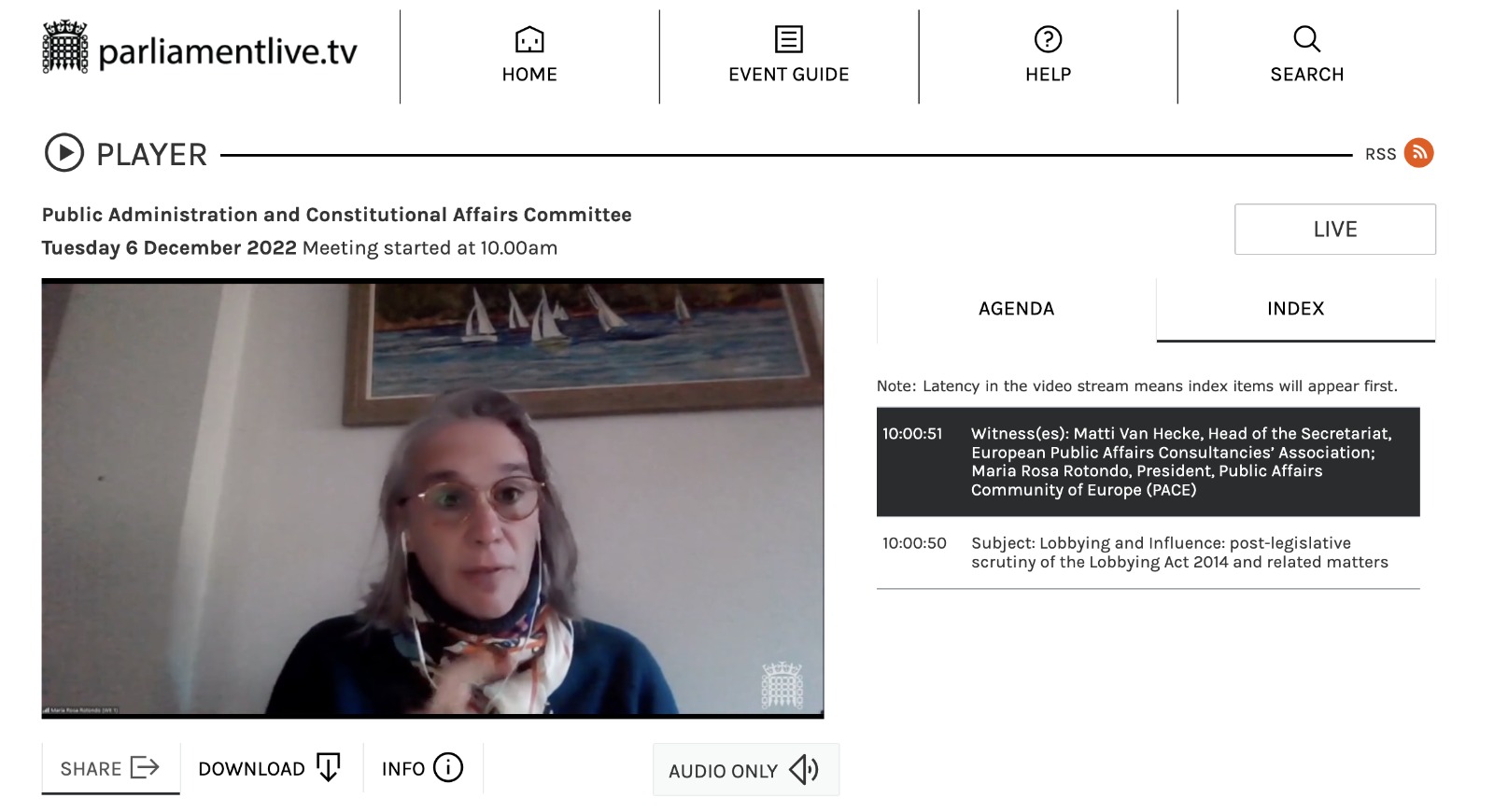 The registry requirements are based on neutral information from the interest group in addition to compliance with the code of conduct, which, according to Matti Van Hecke, “the Code of Conduct is quite standard, behave responsibly and you are not at risk of breaching it.”  In order to monitor these breaches, Maria Rosa Rotondo states the necessity of having an independent body tasked with monitoring and sanctioning.

Mara Rosa Rotondo highlights the importance of a broad definition for the activity to have a comprehensive regulation. She talks about how requiring certain information such as financial disclosures alone from both the public official and the interest representative does not show the whole picture. According to Maria Rosa Rotondo, “We must think of what is really efficient for the register, and often money, for example, is not sufficient to correlate with the influence”. This is why having a definition that focuses on the activity itself and not only the title of the position, business, or other organization is more efficient to identify and regulate lobbying. 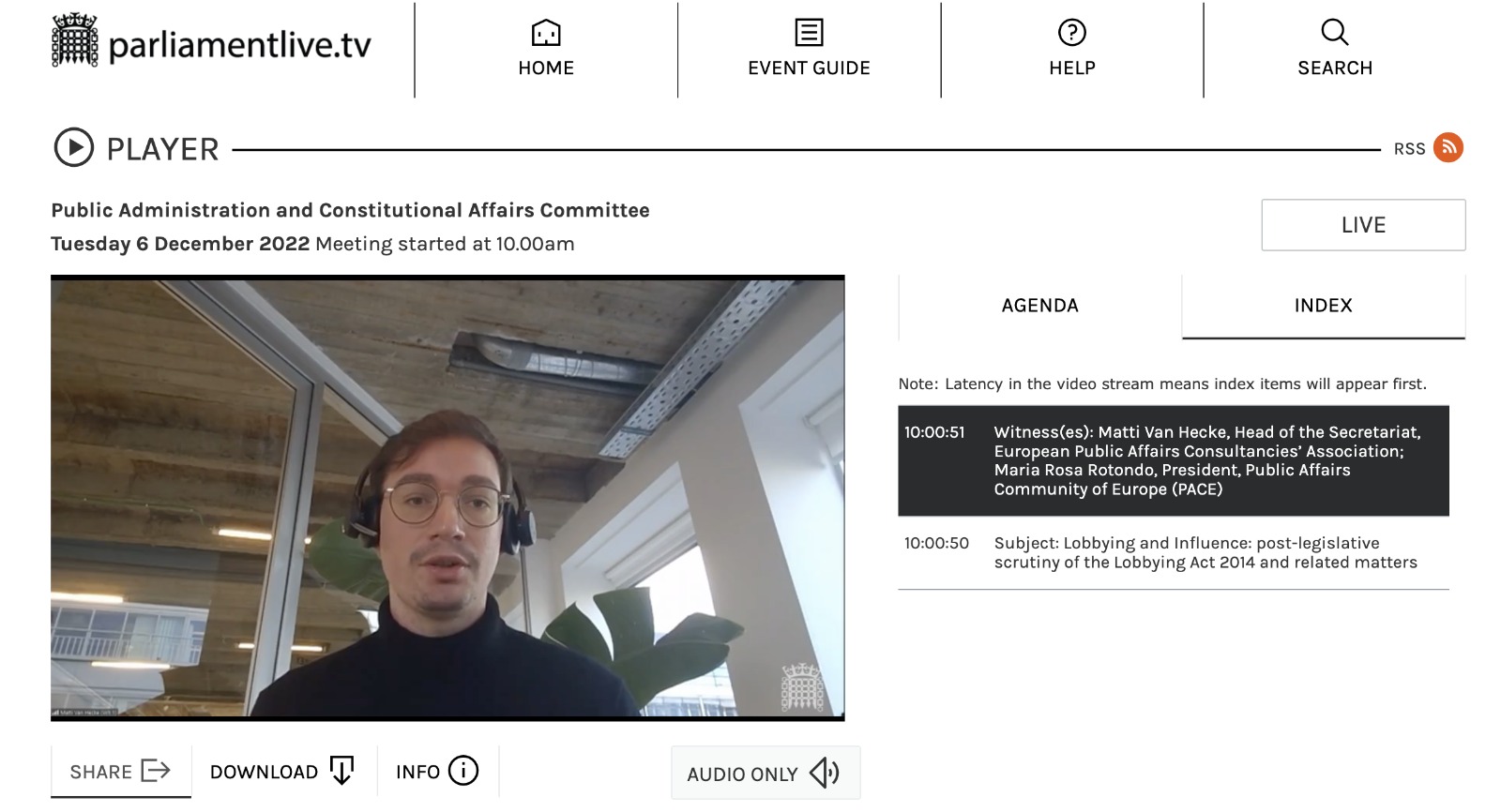 In the end, they asked for their final recommendations on what the British Parliament should adopt in their policy. Matti Van Hecke reiterates the importance of a broad definition of the activity, positive incentives, the involvement of industry representatives to avoid implementation issues, and, finally, adds that the register should be digitalized and easily accessible. Maria Rosa Rotondo recommends that “the mandatory publication of public official’s agenda as an easy, cost-effective way to introduce transparency.” Additionally, she recommends a strong revolving door regulation that attracts good officials, a legislative footprint, and a definition of undue and covert influence that includes social media and media transparency.